Serena: The Greatest Athlete...and a Human Being

I don’t generally go for “Best of All Time” titles.

I think it’s pointless to argue that a particular leader, author, architect, book, singer, president, movie, or anything else was the greatest of its kind for all time. There are just so many factors and differences to weigh and to consider when comparing this brightest star to all others. In the realm of sports you have to consider: the level of competition and the training, nutrition and equipment that is/was available. Even social conditions and cultural expectations play a role. Like, how do we compare a modern “professional” athlete, with trainers and sports psychologists and nutritionists to an amateur from the past who not only had none of that, but who was expected to treat the sport as a hobby, received no pay, and had to get on with establishing a career and a family.
But despite this, I’m going to proclaim that Serena Williams is the absolute greatest athlete – male or female – of ALL TIME. I do so not because it’s scientific fact or anything that I would try to prove, but because I’m so in awe of her talent, her determination and her level of accomplishment. I won’t lay out a pile of irrefutable evidence. Agree or disagree, you have your own champions and biases and stats to cite, I’m sure. I’ll just throw out the single accomplishment (well, eight really; at least two that I consider most staggering:
They are the fact that she won, in succession, the 4 highest level championships in tennis – something only ever accomplished by a small handful of men or women. Then, 14 years later, she did it again! To win even one major championship requires victory in 7 matches, and generally at least a couple of those will be against other top-10 players. And the 4 championships are on different surfaces, on different continents, in different seasons.  And there can be no doubt that tennis is among the most grueling of sports, demanding an extremely high level of fitness and of mental toughness. So the fact that she accomplished this Grand Slam at age 21, then again at age 33, when almost the entire field she dominated the first time around was well into retirement, and some of her competition barely half her age, is, to me, almost beyond belief. 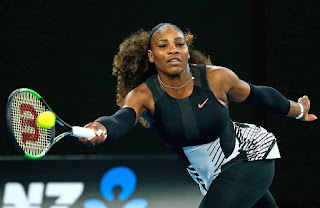 Last week, I watched her lose her latest quest for a major championship – it would have been number 24. And she lost the last time I watched her as well – a couple of months ago at Wimbledon. But my admiration is not diminished by these loses. All champions lose, and lose badly.


Nor am I turned against her by her behavior during the recent U.S. Open. Her frustration and some punishing rulings by the judge got the best of her, and she experienced a near melt down while being trounced by her 20 year old opponent, Naomi Osaka. Yes, I was unhappy, sad, disappointed about several aspects of that altercation. But I don’t see how being a superstar insulates a person against surges of anger or frustration, or from spontaneous self-expression, especially when under such pressure. Serena is human, gloriously so. Given her rage and disappointment, she handled herself well enough, even composing herself enough to comfort, console and express pride and admiration for her opponent. The thing I feel worst about is that all the drama and controversy took the focus and the spirit of celebration from Osaka, who deserved it.


But the other thing I was left feeling after that amazing match was an appreciation that yet another young, powerful and supremely talented brown-skinned girl has ascended to the upper echelons of women’s tennis, along with last year’s winner, Sloane Stevens, just as Serena and her sister Venus are beginning an inevitable descent. As a brown person myself, I can’t but feel satisfaction in this manifestation of diversity in this still almost entirely white sport. I like it even a bit more that Osaka is both Japanese and Haitian, diversifying the diversity, so to speak.


So, Go Ahead On, Serena. Keep on being yourself, and being the Best Ever!

Posted by Kirby Obsidian at 11:22 PM No comments:

We are entering a remarkable time in American History. The Reign of Incompetence is about to end! A threshold has been reached. Americans are beginning to really come to terms with the consequences of electing a shallow, immature, self-obsessed narcissist to the most important and powerful position on Earth.

A revolution of sorts is taking place. Members of the innermost center of government are actively organized against the agenda and efforts of Donald Trump. And they are doing so, fully recognizing that this man is doing harm to the country.

This on the heels of Bob Woodward's book, of Cohen's explicit guilty plea, the continuing Mueller investigation. Have enough of us woken up?

Of course, so much of Trump's fervent base is tied to him because of his commitments to a right wing court, the repeal of Roe v Wade, support for guns and for coal and for de-regulation. They will never again have a champion like him. And they won't give him up. Trump and these will cling to their power. Would they accept Pence? Would the rest of us? Regardless of that, some of them must simply be able to separate the politics from this pitiful, limited adolescent they are serving and adoring.

Huge problems are that Trump has consistently peddled his messages against the media, against the left, the courts, against any entity that resists him. And so many have bought in to the conspiracies about all the powers arrayed for the sole purpose of unfairly bringing him down.

A wild time. I haven't read the Times editorial yet. Apparently it calls for activity from the people. I want to be, need to be, more involved in this. It's such a crucial time. And there is so much complacency, cynicism, rejection of personal responsibility. I must choose to be active in this. Speaking out. Raising my voice more regularly will be the start.
Posted by Kirby Obsidian at 8:58 PM No comments: