Man oh man, what a fun ride!
We’re in Tucumcari, after exploring Santa Fe for a few hours.
We’re nearing the end, and beginning to feel the wear and tear of it, having to pack and reload every morning, and the hours of driving. 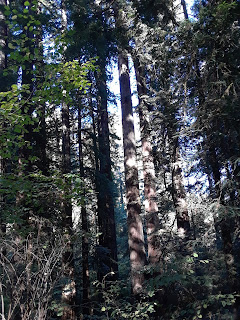 But so so much we’ve seen along the way, and so many nice connections.
Greenlake and the rain forest, Ruby Beach
Astoria and Tongue Point, and Seaside, where I lived in ‘80
Powell’s bookstore in Portland, which incredibly not only endures, but now takes up an entire city block around its original, modest footprint.

We got down and into the Redwoods, then the amazing sweep and swerve through the Coast Range.
In Chico, we overheard a conversation between our hostess, who’d involved herself in relief support to evacuees of Paradise, and a young friend who’d live there. He reported that his entire family was burned out – 10 homes – and that he’d come close to being among the dead: residents who woke to smoke and ran to their cars, only to be trapped by the elevation and inaccessibility of the place. He became blocked in, and heard explosions of propane cylinders and possibly cars going off. A bulldozer came along and drove aside the dead vehicles. He and his ninety-year old mother replaced Marzena and I in the guest room. 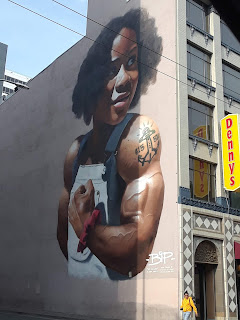 We hit San Francisco, drove about, walked some, she took lots of photos.
The next day we got onto highway 1, and it took us four hours to cover forty miles, the views stopped us so often.
The worst thing about this trip’s timing is the early dying light, so we sped though the dark to make it to LA to meet an old friend. He directed us to the Santa Monica Pier for our morning exploration and we didn’t even know until we were there that we’d pop up on Venice Beach.

We got to slow down in San Diego, where we had a good visit, followed by another in Mesa. We left there last night to bend our path north to Santa Fe, and do you know there was snow on the ground and ice in cracks in the sidewalks? We were totally unprepared for that, but given the elevation at 7,200 ft , we should have been.

We’re on our way to Houston, and we’ll be at least a day late for Thanksgiving in Atlanta.
Next Monday, I’m at work at 9am.

It was GREAT to hang out with you!
I look forward to the next time!

Posted by Kirby Obsidian at 12:18 AM No comments:


We've completed a sweep through my past; we've visited all the west coast cities I ever lived in: Seattle, Seaside, and yesterday, San Francisco. Nostalgia ran deep. My time in Seattle ended 25 years ago; Seaside, 37, San Fran, 44. In each place, we drove by places I lived, worked, hung out. The folks I knew then are mostly gone, moved - I was never great at maintaining any but the deepest relationships.

The reconnections I was able to make, and those still ahead, in L.A., San Diego, Phoenix, Houston, Atlanta...all have a future as well as a past. And aside from Atlanta, these are places I know very little or not at all - new landscapes and city-scapes to learn. 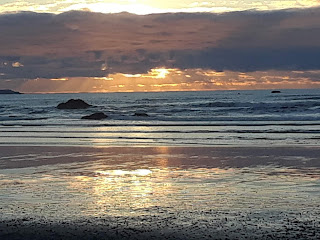 This is a great trip to be taking with Ponczka. We've now been together through almost all the places either of us has ever lived, and quite a few more besides. We've travelled one another's geographies. And geography means something, means so much. I feel the effect these different environments have had on me.

Yesterday, I was remembering hitch-hiking to San Francisco from Atlanta, just after turning twenty and being out of school for the first time in my life. That trip was very much about opening up new pathways into a different future. Back then, what San Francisco represented to me was alternate lifestyles and alternate ways to thinking and being. It was, for example, the place I first allowed myself a self-definition that wasn't centered around being Black. When I arrived, I did not immediately go to the Fillmore, San Francisco's Black community, because I was much more interested in Haight-Ashbury. I allowed myself that: to be moved by what I was drawn to. rather than what I thought I was supposed to be drawn to. And therefore, I found myself mostly meeting young White people, some of them hippies, mostly travellers as I was, mostly explorers, as I also was, looking for how to be other than how they'd always been defined. 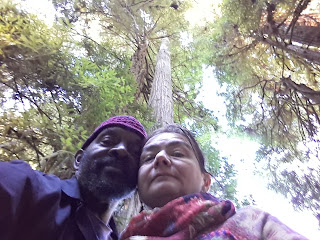 Ponczka and I are exploring what our next years will bring, where we will be and what we will do. We know it won't simply be an extension of what has already been. One of the most special things about her is her capacity to imagine the new and to nudge out lives toward it. One of our favorite games to play together is imagining living in places we don't live. So more than a dozen times already, one of us has said to the other, "Okay, let's buy THAT place, and move here." And the other will agree and speculate about where we might work, and we'll be off into imagining parallel lives for ourselves. 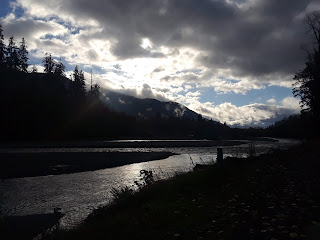 After thousands of kilometers West, then South, we've almost at the point where we'll turn East again. A few old friends still to see, and mostly new places to explore. It won't be so much about nostalgia. Much more about what's next. One of the best things about a trip like this is how it opens possibilities. The world is so, so full of possibilities. So many different environments. So many different life styles. So many different ways that human beings can be creative. It underscores the reality that our lives at home are in no way inevitable. There is no such thing as inevitability. We create in every moment, and possibility is unlimited.

Posted by Kirby Obsidian at 11:12 AM No comments:

We’ve just spent our second overnight in Bellingham, Washington, a small city between Vancouver and Seattle that’s home to Western Washington University. Our host Scott drove us around the oyster farming bays with views westward to the San Juan Islands yesterday. We stopped in the tiny village of Edison and ate fried oysters, reminding Scott and I of a similar trip on the east coast when we sought out and devoured fried clams.


I’m in downtown Bellingham this morning to get an oil change for the Nissan Micra that’s carried us 4,700 kilometers already. Later, we head for Seattle, the destination that inspired this trip – completing the re-tracing of the route I drove in May 1993 with my new wife, when I moved from Seattle to Toronto. I’d never have believed that it would be a quarter century before I returned. I had just turned 39 then, and was finishing up 12 years in Seattle. Now I’m 64, much changed in some ways, not so much in others. I expect to find Seattle the same – altered yet familiar.


Some things are already familiar, being this close. The West is easier than the East. People are better at taking their time, they move with less … what’s a good word that falls between determination and desperation? It feels right to say that there’s less gravity here and more space. It seems there’s less obesity. I think that here one feels more free and open in ones body, has a more balanced relationship with time. Our brief time in Vancouver has already confirmed my memory that even the big cities feel less removed from nature, from wilderness, from Wildness. And this too is a kind of freedom.


This time in and around Seattle will mark my deepest brush with memory, with nostalgia. I did so much growing up and exploring here. I’m excited to walk Capital Hill and Fremont, the U-District and Beacon Hill. The handful of visits will be bitter-sweet. These relationships were interrupted and for the most part, I haven’t been a good long-distance friend. I’ve completely lost touch with most of those who shaped my life back then. But I’m so glad to be here, to reconnect where I can, to feel gratitude for what my time here brought me.


Hello Seattle and  Goodbye again. Thank You, Great NorthWest. It was a great Blessing to have this place as Home.

Posted by Kirby Obsidian at 12:37 AM No comments:

We're seven days on the road now - We've made it from Hammertown to Vancouver. It's raining and it's perfect.

It was pure coincidence, but is adding spice to this journey, that it began just before Halloween, finishes with Thanksgiving, and that this hysterical and panicked race for political supremacy reaches one of its climaxes in three days. I've voted as an absentee for twenty-six years, and though I will again on Tuesday, I'll be doing so while in Seattle, where I'm still registered.

The continent is majestic. We've stopped for the night in Spragge, Ontario - north of Superior, Thunder Bay, just west of Winnipeg, in Swift Current, Calgary and Revelstroke. I love that name...Revelstroke. I once had a friend who grew up here - an unhappy childhood, she said. But as I bought take-out downtown, and imagined one of the waitresses was her sister, and drove between those towering and inspiring summits, draped in wisps and splashes of cloud, I thought - at least she had this magic, and knew that was part of what had made her special to me.

It's a huge land. In space, in breadth, in imagination. So many memories crowd in, of times I've crossed the continent before, in cars, on trains, hitch-hiking. In a hurry to get back someplace, or reaching for someplace I'd never been; loving, longing, sometimes lost.

It is deep and humbling Earth we're crossing, doing it together for the first time, and it's her first time ever. We feel seeds being planted in us as we observe this land, and the people on it, how they are part of a place and that place part of them. It's felt like a grand sweep, rolling west along the Trans-Canada, through the tumble of northern Ontario, the lakes then the flatlands of Manitoba, the country they call Living Sky for millions of reasons, the Rockies thrusting up, the bulge in the mantle that it is. Sometimes its good to feel so small. It's small and a piece of something grand. How lucky we are.

Posted by Kirby Obsidian at 10:30 PM No comments: